Aubrey R. Taylor Communications, the publisher of Houston Business Connections Newspaper would like to welcome Dr. Kendall L. Baker into our family of supporters. Dr. Baker is a candidate running for Houston City Council for District F in the Tuesday, November 3, 2015 City of Houston Mayoral Election against incumbent Council Member Richard Nguyen who is currently serving his first term in office. Also in the race seeking to unseat Council Member Richard Nguyen is Dr. Steve Le, a local physician and entrepreneur. “I’ve watched Dr. Kendall L. Baker from afar for several years now,” says Aubrey R. Taylor, publisher of Houston Business Connections Newspaper. “And I think he should be viewed and considered as a serious and very credible candidate who has a sincere desire to represent all the people living in District F -- should he be elected on Tuesday, November 3, 2015,” Taylor went on to say.

"Aubrey R. Taylor Communications, the publisher of Houston Business Connections Newspaper will not be making any endorsements in the Houston City Council District F race, as Council Member Richard Nguyen, and Dr. Kendall L Baker are both candidates who are asking for our vote, prayers, and support in the upcoming election," explains Taylor. "However, reader endorsements for the HERO Ordinance and 2015 Race for Mayor of Houston will be released on Friday, October 16, 2015."

"The only question now is whether the African American and Hispanic communities are going to show up at the polls to vote -- and that my friend is a story for another day. So stay tuned...” Taylor says.

"I stand for “equality” but not “special rights!” Our current Mayor, Annise Parker, is calling for Equal Rights which are in fact particularly and especially designed, aimed, and intended for the LGBT community who wants to implement policy that will threaten religious freedom and criminalize those who stand for the protection of women and children. This ordinance gives men access to women's restrooms and other public accommodations. As your Councilman I'm against this type of ordinance and I will protect religious freedom, family values, women, children and citizens in general," says Dr. Kendall L. Baker.

In case you don’t know, Houston City Council District F has a large Vietnamese American constituency. District F pretty much covers southwestern Houston including parts of Alief, Westchase, Tanglewilde, and the Briarmeadow area. You can (CLICK HERE) to study the map of this district. You can (CLICK HERE) to see if you live in District F and are eligible to vote for either Dr. Kendall L. Baker, Council Member Richard Nguyen, or Dr. Steve Le on Tuesday, November 3, 2015. Early voting for the 2015 City of Houston Mayoral Election will begin on Monday, October 19, 2015 and will end on Friday, October 30, 2015. 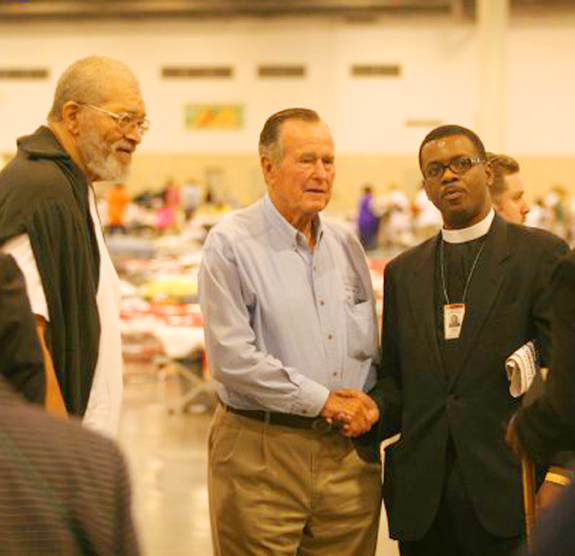 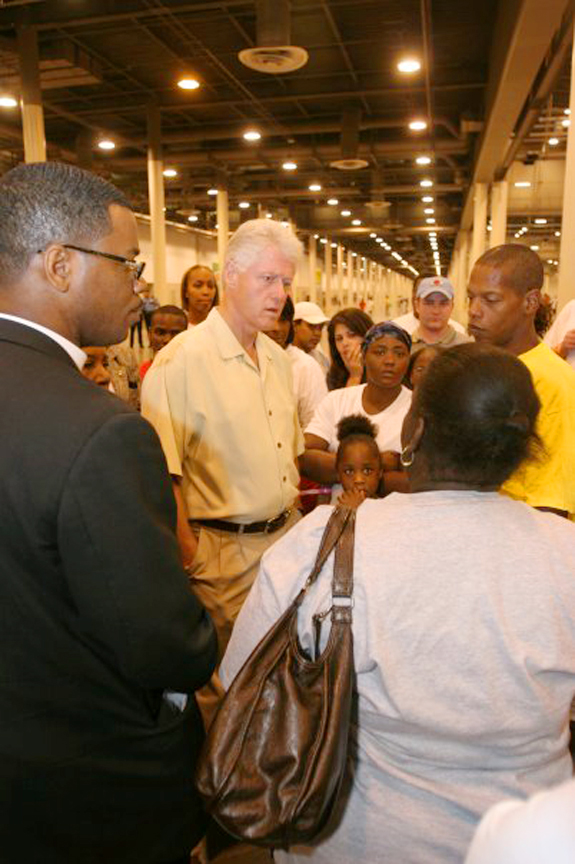 Dr. Kendall L. Baker is a native of Houston, TX who was raised in Fontaine Place; a northeastern Houston suburb. He attended several local colleges, Bible colleges and seminaries and currently holds a Doctorate of Divinity degree from Kingdom Builders Bible Seminary and a Ph.D in Pulpit Communication and Expository from Covenant International University. He is married to his lovely wife of almost five years Esther Iyoha Baker.

Dr. Baker retired from the City of Houston after 29 years of public service. His exiting position was a Division Manager for the Administration and Regulatory Affairs Department, Operations Division, 311 Help and Information Center. There he served as a versatile professional with broad experience including management and staff development, in depth knowledge of contact center operations, and problem solving abilities. During his tenure, he also worked in various management capacities in other departments including the Office of the Mayor, Public Works & Engineering Department (PWE)- PWE – Consumer Affairs Division, PWE – Utility Operations Center and the then General Services Department – 911 Emergency Network. Apostle Baker was widely known as “the voice of the City” for the many illustrious voice-over jobs he performed for the City whenever called upon by the Houston Information Technology Services or (HITS} Department. While working for the City of Houston, Dr. Baker simultaneously pursued the call to ministry. 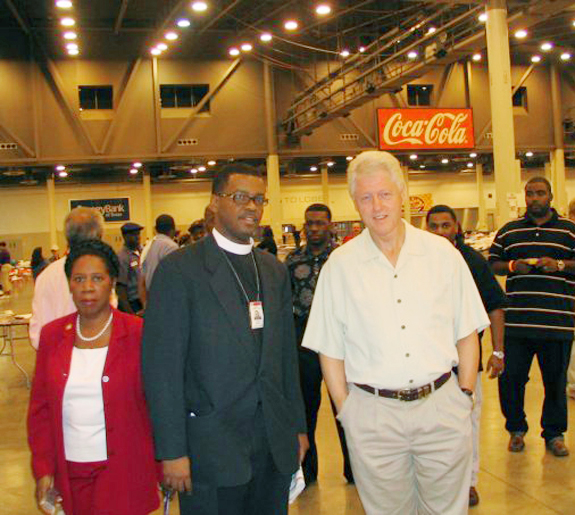 From 2012 to 2014, Dr. Baker served as the inaugural Chairman of the Houston Police and Clergy Alliance as well as a past member of the Houston Ministers Against Crime, where he served for nearly 20 years. In the past, Dr. Baker has also served with the Houston Independent School District south area, the Harris County Juvenile Operating Board and the NAACP Houston Branch.

He is currently Director of Field Operations for the Houston Area Pastor Council (HAPC), under the leadership of Rev. Dave Welch. HAPC was founded in 2003 by Rev. Welch working alongside a group of thirteen pastors as a trans-denominational, inter-racial coalition of senior pastors who came together to bring a united, Biblical voice to the city, state and nation. We have since grown to over 300 plus senior pastors in the Houston area as well as assisted in developing Pastor Councils in Austin, Beaumont, Sacramento, Virginia Beach, San Antonio, El Paso and other cities around the nation that are organizing, subsequently birthing the identity of the U. S. Pastor Council (USPC) and Texas Pastor Council (TXPC) to connect those teams of pastors. USPC is the only culturally and politically active organization from a Biblically grounded perspective that is focused on developing strong, functioning teams of pastors in each city as a means to enlisting a strong remnant at the grassroots level.

In 2007 Dr. Baker contested for a Houston City Council At-Large seat that was later won in a run-off by Melissa Noriega. In March of 2011, Dr. Baker was elected to the office of the 3rd Vice President/3rd Bishop and Overseer of the Family Life International Fellowship, Houston jurisdiction under the leadership of the late Bishop Robert C. Jefferson.

In 1994, Dr. Baker accepted his ministerial calling while ministering alongside his biological father, Pastor Earnest L. Baker of Wilson Temple Church of God in Christ in Rosenberg, TX. In 2004, Dr. Baker was ordained as an Elder in the Church of God in Christ. Nineteen years later, in 2013, Dr. Baker founded Christ Solid International Church; a trans-denominational Christian church located on Houston’s southwest side (Tanglewilde Subdivisions) The ministry offers weekly worship services, evangelism, teaching and prayer to the community.

As Senior Pastor of Christ Solid International Church, Dr. Baker operates under the anointing of prayer, teaching, healing and deliverance, where the living word of God is ministered with power to the people of God. His Sunday services from the inception of the ministry started in his town home with only a few believers who believed in the purpose, vision and the call upon the life of the man of God. As the Lord added to the ministry daily, they have since moved into the Cedar Creek club house and have future plans to relocate to a larger sanctuary.

In addition to traveling annually around the country and to South Africa for ministry opportunities with Bishop T. D. Jakes Ministries, Dr. Baker has been used by God to preach the gospel in many countries including, Nigeria, Ghana and the United Kingdom. Dr. Baker also attends crusades and works closely with Pastor Benny Hinn. In 2006, he was ordained under the Potter’s House International Pastoral Alliance (P.H.I.P.A.) – a spiritual covering for senior pastors, under the leadership of Bishop T. D. Jakes.

Dr. Baker is also the founder of Orion Title I Community Development Center, Inc., a non-profit 501(c)3 geared towards, caring for the needy, sheltering the homeless, employment consultant, motivational speaking and mentoring and empowerment of youth and more.

The focus of Houston Business Connections Newspaper from now through Tuesday, November 3, 2015 is being placed on voter education, engagement and empowerment heading into the 2015 City of Houston Mayoral Elections. Early voting begins on Monday, October 19, 2015. Call (832)212-8735 for more information. Or you may email the publisher at: aubreyrtaylor@gmail.com to discuss your inclusion. 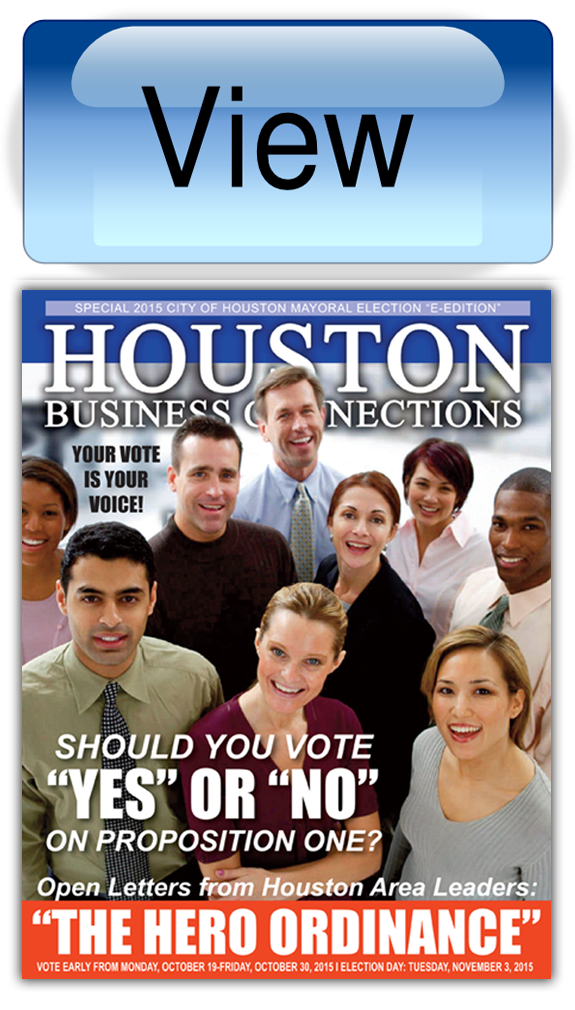 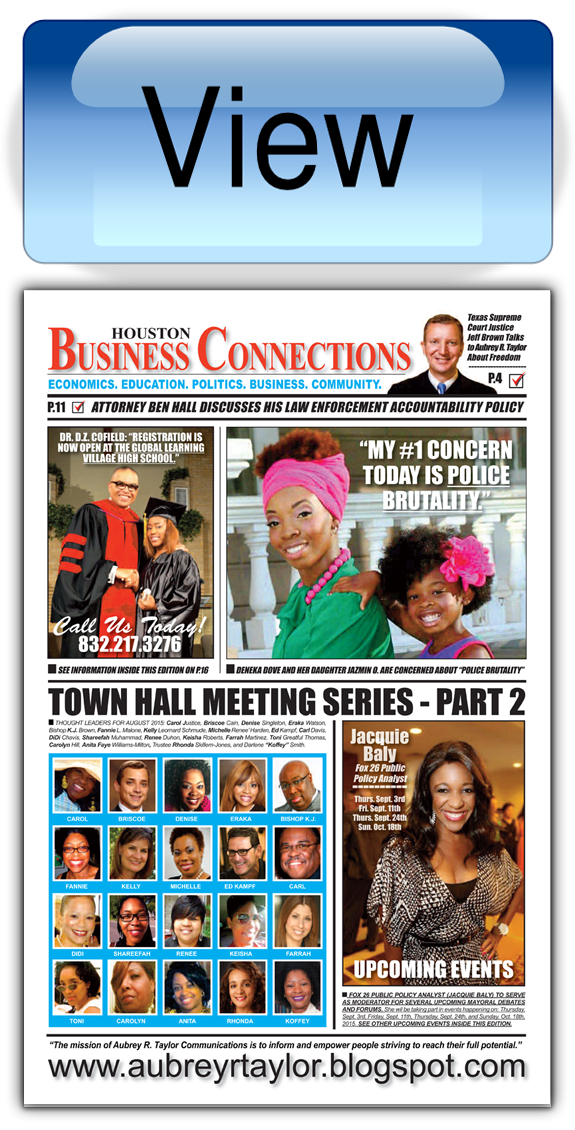 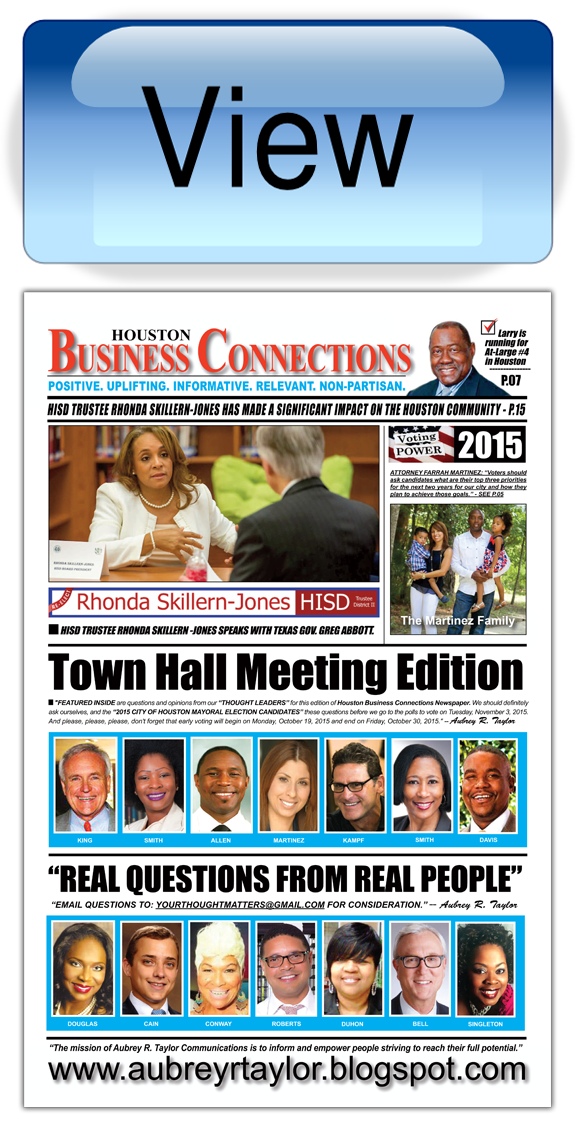 Are you confused on matters pertaining to the HERO Ordinance? Well, you are strongly encouraged to read the ordinance for yourself before going to the polls to vote. You can (CLICK HERE) to read the ordinance for yourself. "Voting is a personal decision that every voter should make from an empowered position. The 2015 City of Houston Mayoral Election will be perhaps one of the most important elections that have taken place in the last 50 years. So to this end, please research and study the candidates and issues before going to the polls. Early voting will be taking place from Monday, October 19, 2015 through Friday, October 30, 2015. Election Day is on Tuesday, November 3, 2015," Aubrey R. Taylor, publisher of Houston Business Connections Newspaper -- You are welcome to call (832)212-8735 to discuss your inclusion.